Inside Scoop: Getting to Know the First Domestic Violence Shelter. In this series, you will hear from the many different voices that encompass Women’s Advocates. You will be able to read direct quotes from our advocates to gain a deeper understanding of our shelter and about domestic violence advocacy. Learn more about the descriptions of the various advocates and team members by clicking here.

What is a myth or common misconception about your work and domestic violence in general that you would like to address?

Women’s Advocates is a domestic violence shelter filled with a dynamic, compassionate, and caring team. Here is what some of us would like the community to know about various common misconceptions about our work and domestic violence. 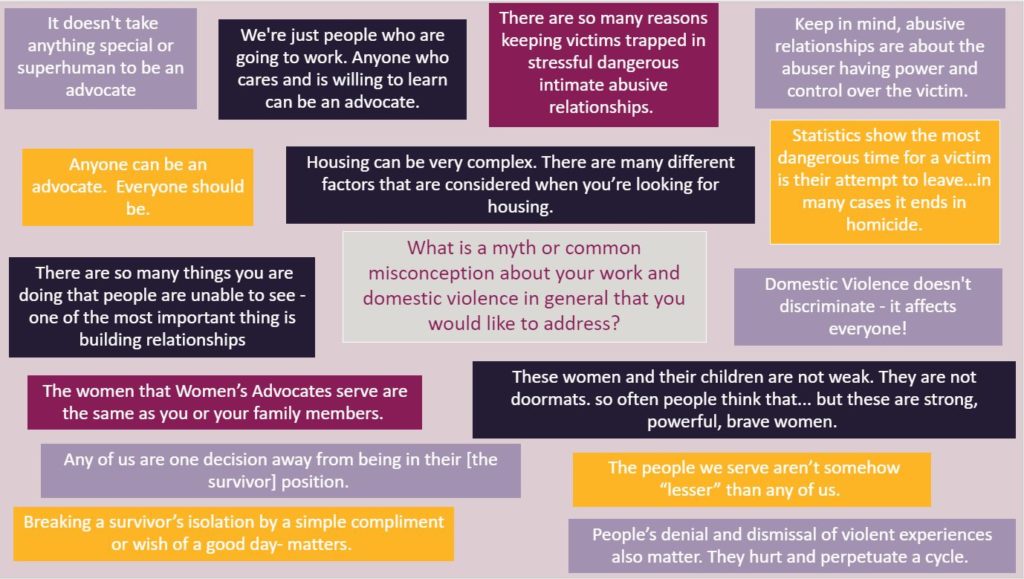 I’m going to answer these last two questions together. A comment I hear a lot from the community (folks who are not involved with shelters or DV work) goes something like “oh my goodness, that must be so hard/you’re such an angel/I could never do that/your work is so needed.” And yes, the job is hard sometimes, and the work is needed! But I want people to know that it doesn’t take anything special or superhuman to be an advocate. We all have that in us. Nobody at Women’s Advocates is a saint or an angel (although sometimes we make little miracles happen for people)- we’re just people who are going to work. Anyone who cares and is willing to learn can be an advocate.

A misconception that I would like to address is that one person can’t make a difference. Many people fear intervening in a violent relationship because they don’t think it is their business or they would rather not get involved. Of course, your safety is important, but people underestimate the power of connection. Breaking a survivor’s isolation by a simple compliment or wish of a good day- matters. It all matters. People’s denial and dismissal of violent experiences also matter. They hurt and perpetuate a cycle. You play a role in this regardless, and you have the opportunity to choose what kind of impact you want to make.

I would like to address the misconception: “Victims are not trying hard enough to leave their abuser. ” There are so many reasons keeping victims trapped in stressful dangerous intimate abusive relationships. Keep in mind, abusive relationships are about the abuser having power and control over the victim. If and when, the victim makes a decision to leave the abusive relationship, the abusive partner sees it as a threat and retaliates in destructive ways to gain and maintain power and control. Statistics show the most dangerous time for a victim is their attempt to leave…in many cases, it ends in homicide.

We’re not heroes.  Anyone can be an advocate.  Everyone should be.

HA! That if people work with me they WILL HAVE HOUSING. That is not true. I am not a landlord and I don’t have any magic bag of tricks to get people housing. Housing can be very complex. There are many different factors that are considered when you’re looking for housing.

My Work: “Alls you do is babysit ” or “Childcare” My job may be a fraction of this and it’s like saying ” your just a mom ” There are so many things that people never look at or judge ” they don’t have kids in there so they ain’t working ” When in reality there are so many things you are doing that people are unable to see – one of the most important thing is building relationships. A child is coming to us from a situation that is uncertain, usually has been living in more places than an adult has their whole life, experienced scary situations and you have to start from scratch – that’s something you don’t learn from anything but experience. There is planning, connecting with not only staff but community and most importantly the mother of that child – looking through the trauma lens and not judging. Realizing that the child is a major part of the family and not just extra baggage. That they feel and experience the stress and trauma and are reacting to what they have been through. It is just as hard on them or harder especially when they are teenagers, That they need support and help just like the mothers do and they deserve it. Domestic Violence doesn’t discriminate – it affects everyone!

The women that Women’s Advocates serve are the same as you or your family members. The majority are employed or have been recently. They are great parents who want the best for their children. They are women who work very hard so they and their children can enjoy a better life free of violence and fear.

These women and their children are not weak. They are not doormats. so often people think that… but these are strong, powerful, brave women.  About 1 in 4 women and 1 in 10 men will experience intimate partner violence, so chances are someone you know right now is in such a situation.  It takes a lot of bravery to step away from that, to ask for help from strangers, and to move forward.

Domestic violence can happen to literally anyone, regardless of age, gender, race, zip code, it could happen to any of us at any time. So the people we serve aren’t somehow “lesser” than any of us. Any of us are one decision away from being in their position. Additionally, doing this work doesn’t make me some sort of saint. It is so frustrating when I tell people what I do and they say something like “wow, I couldn’t do that” or “that’s great you’re doing that, it’s such important work”.  Don’t put us up on a pedestal like that.